My Boys Said That 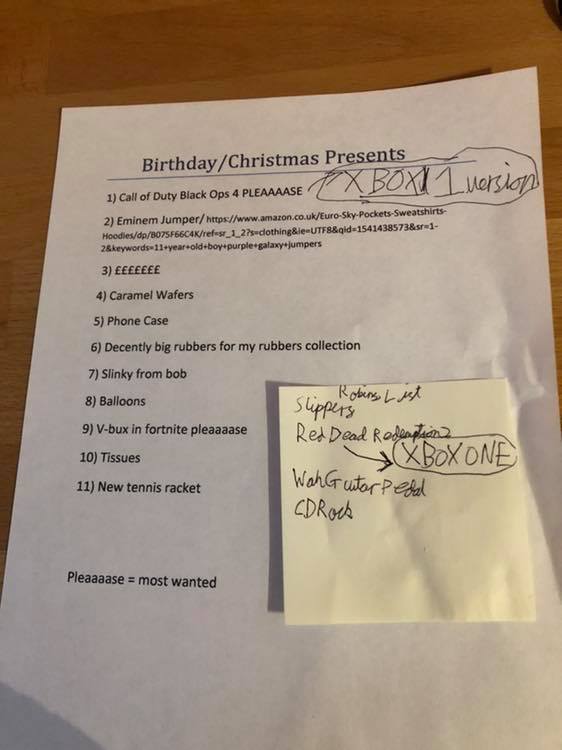 Luke's (large) list - age 11 Robin's (small) list - age 14
Kissing
Return journey from Dieppe, us all sitting in the car waiting to board the ferry. We have been here some time.
Robin starts up on a subject for which he has (for not much longer I suspect) a fascinated horror: kissing.
'Why do people DO that?! With tongues....!'
Luke looks round sagely at the harbour cliffs. 'We're in the country that invented it.' (11 & 5)


Royal Wedding
Me: Robs, that's the Queen.
R: I know
Me: She's on all our money and stamps.
R: I KNOW!
Me: Luke, look at the pretty lady in the white dress
L: NO!

Some time passes
R: The wedding's yucky
Me: You got a day off school for this
L: The wedding's stupid
Me: Why?
L: It just is. I want to get dressed now
Me: See that man. That's Rowan Williams. He made Gran a priest. He's got a good cloak on.
R: Yeah, he's cool

Some time passes
Robin just zoomed through the room as they were coming out of the Abbey. 'So, are they getting married then?'  (6 & 3)

What I did at.....
Came in just now to find the boys knee deep in the Wii.
Me: How was school today?'
Robin [distractedly]: Yeah good.
Then as the memory came back.
Robin: Actually, terrible.
Me: Why's that?
Robin: We watched a film about penises and beginas. I mean vaginas. Right there in the middle of the screen.
Me: Right. What about you Luke?
Luke: Don't be cross mummy, but I was on the warning cloud.
Me: Why's that?
Luke: Mack came up and punched me. So I accidentally runned into his head.
Me: I see. Was Mack on the warning cloud?
Luke: No. Miss Bassett didn't see him.  (8 & 5)


Mothers' Day
Robin: 'So Mothers Day is when mothers get together and talk a lot.'

Me: Luke, you'd better get dressed because we're going to the garden centre.
L: I don't want to.
Me: Yes, but today is Mummy's Day and I'd like to go and have breakfast.
L: I want to have a stir fry though
Me: (puzzled as to which of the few items Luke eats could be coaxed into stir fry form) Ok, we could do that when we come back.
Luke: No, the thing where they bring the chips to the car and you eat them.
Me: (puzzled look)
Luke: That we did last week after the cinema.
Me: Oh, you mean the McDonalds drive thru.
Luke: Yes (with great emphasis and head nodding)
Rock 'n' roll, Luke, rock 'n' fricking roll.....   (8 & 5)


Transport
I was explaining to Luke, who was pottering about in a half-listening fashion, that we were going to pick up Daddy at the airport later
and we would wait for him at the barrier. 'So is Daddy coming in a barrel...?
'Do you mean barrier Luke?'
'Yes. But is he coming in a barrel? Like in that book.'
Me: Do you mean Captain Pugwash...?
'Yes, that's Captain Jake' piped up Robin from next door.  (7 & 4)


This is an Action One  (or a poo one)
Just been to Robin's parent evening at school. Robin was at art club, so it was just Luke and me. We'd been in the room for a few minutes
when Luke announced, 'My poo is coming now'. Having faithfully carried the potty round for the last week (and Luke having done a wee in it a mere 10 minutes previously), it was close to hand. So Luke retreated tactfully round the corner of the classroom before emerging shortly after to show me and his 2 teachers his poo and explain at great length how it was 'a big one and a small one' and how he needed 'wipe-wipe.' This is, I suspect, a first for Parents Evening. Robin is doing well, I think, but Luke upstaged him beautifully.


Luke's toilet training has been going on since Methuselah looked sprightly. Robin is far more caught up in the training than Luke himself, who most of the time can't be arsed (he he heh). This morning Robin made a 'deposit' in the potty, then tried to claim Luke had done it. When questioned, he then moved to 'Luke did half and I did half', before confessing it was all him. Luke still tried to get a chocolate button for doing a poo mind.  (6 & 3)

Took the boys to Pizza Express for Luke’s birthday. It’s great when they’re winkled away from gadgets, we have the most excellent conversations.
We covered the health properties of wine, what NOT to do if you’ve eaten a hot chilli, Schrodinger’s Cat theory (just the idea that it exists, not the theory which makes my little head explode) and a ‘tree falling in the wood’ concept. Luke explained most vehemently how it would definitely make a sound and you could prove it by setting up recording equipment.
‘Well,’ said Robin. ‘You can see Luke’s a science not a religion man.’ (16 & 13)

Drove to see my mum in her Care Home with the boys.
On the way back, Robin ironically suggested playing ‘I Spy’. This was vetoed, as was my suggestion of the playing of the crappy cd of TV Theme Tunes that we have to guess that resides in the car for just such occasions.
So, we ended up playing Professions, where you take it in turn to name a job for each letter of the alphabet. Some of you might remember Luke suggesting Frog Whisperer earlier in the year. Generally he starts talking until something making some sort of sense comes out.
These were some of today’s highlights, F clearly is vintage.
Estonian rapper (this one of Robin’s in fact)
Foot model
Freeloader
Freezer
Imp
Kardashian (16 & 13)

Today on a drive, we were playing naming ‘celebrities’ for the alphabet. Luke was incensed I’d snaffled Farage, so I said he could have Laurence Fox, who I’m sorry to say  I described as a See You Next Tuesday (because he is).
‘Oop. Helmets on. Mum’s dropped the C-bomb’ piped up my dear Bob.
Maybe you had to be there. But those of you who’ve encountered Robin’s exceptional timing and deadpan delivery can imagine it. (16 & 13)

Driving to Chipping Sodbury. Luke is especially perky (read: noisy) in the car.
‘Robin, if you had a dog, what would you call it?’
In the rear view mirror, I see Robin closing his eyes and looking especially pained, as if there were a host of Jim Davidsons in the car.
‘I’d call it Luke.’
‘You can’t do that! That’s my name!’
‘Dudley, then. Pedro.....’  (16 & 13)

Eating
Luke appeared as I was doing the online shop, Robin standing nearby to check his beloved Pot Noodles were being added.
‘Robin might laugh at this but I’ve decided I want to try some baking.’
Robin and I blinked in surprise.
‘I want to make a cake. By myself.’
This is slightly problematic as he has a delicate gut and is technically supposed to avoid dairy, egg white, most flours except rye and sugar’s not great either. Happy Days - mungbean mush anyone?!
We don’t stick to this rigidly, although I do restrict his dairy and limit eggs to just yolk where possible.
I told him this might be challenging.
‘I want to make it for just you and Robin, I won’t eat it.’ (Cue more blinking from us - I think this ‘not eating it’ will not come to pass).
I told him to consult one of the many cookbooks downstairs to find a recipe.
After a while he appeared with a sheet of paper.
‘I printed a recipe out. I didn’t want some mouldy old thing from Nigel Express that doesn’t tell me what it is.’