My Boys Said That
Image
Me, this morning, looking at the boys. 'I wonder if I should put suncream on you...'
Luke: No, I'm building a tan. (7)

Birthday
Luke: I know where I'm going for my birthday treat. [It is April, his birthday's in December]
Me: Oh, where's that?
Luke: Mars.  (7)

Abroad
Driving through France with the boys and their step-granny Jill, a sudden gust of wind made Jill sneeze explosively.
There was a slight pause, then Luke piped up: 'Is that how they sneeze in France...?' (5)

We visited an unusual half built house in the woods the other day with sculptures, paintings and a statue of a man
displaying his glory, as it were. Today we were at a cafe and Robin was looking at his pictures. Luke, craning to
see the camera over his shoulder, asked in a clear voice, loud enough for the English people nearby,
'Is that of the man with the big fat willy...?' (3)


Religion
Luke, Robin and Dad are out in a wood. Robin and Dad have sticks. Luke picks up a stick.
Luke: 'I'm going to keep this stick to remind me of you, Dad. When you're dead.'
Later, 'Where's your stick, Luke?'
'I threw it away.'
So that's the memorial gone. (5)


Luke: Mum, imagine you're 40.
Me: Yes, I'm imagining that.
Luke: And you're a bully. And you're on a cross. And if you want to be able to breathe you have to lean forward.
Me: Right.
Luke: That's what happened to Jesus. (5)

Luke wanted me to print out a picture of Jesus for him to copy. The one he chose had particularly impressive robes on.
'I like that one. He looks like a chef.'  (6)

Luke: Do you reckon Joseph was annoyed when God impregnated Mary?
I tried to explain the concept of Immaculate Conception.
‘You mean they hadn’t even smashed?’
I said I thought they were probably betrothed.
‘And God just steamed in there?! He’s a sinner.’  (13)

I have posted this verbatim, resisting my urge to correct misplaced capitals and the like.
Who am I to question the work of this religious guru…?

My religion: Pansir
Main belief: humans grow on trees as leaves
What we believe in:
The earth is a triangle
You must eat pumpkin seeds every sunday
Teapots are forbidden - use your hands
On the first day of every month you must stare at a clock for an hour whilst pouring water up your nose
Tom cruise is the devil
Carpets are forbidden
Blind people are lying
Dodgy uncle Ben is our god
Our sacred places are replicas of simon cowells house
We own the country Malaysia
You must carry a Bowling ball with you at all times
You must wear 3 capes and 2 swimming goggles at all times
You must sleep with a mug on your face
Throw your shoes at someone as a sign of welcoming
You recite the full script of shrek every morning
The earth is 890 hours old
Cats are the spawn of the devil  (13)


Not How IT Should Be

'Where is the sun gone?' How do you explain the disappointment of English weather to a 2 year old?

I dragged Luke out (during lockdown April 2020) to get his exercise on to the beach pointing out that the Vitamin D from the glorious (praise be) sunshine would be good for him.
‘So if I was bollock naked, would I get more Vitamin D...?’ (12)

I let Luke stay up to watch a bit of the X Factor as a special treat. (I realise some of you would regard this
a treat along the lines of sticking a burning hot rod in your ear. S'occasion innit!).
About 10 minutes in came the inevitable ad break. Luke stared disapprovingly at the screen. 'This is wasting my time.'  (4)

Luke came in as I was watching Sarah Beeny’s A New Life in The Country (don’t start on me, it’s very relaxing.)
After about 39 seconds he said disapprovingly: ‘There’s a lot of pathetic fallacy in this...’  (12)

I played football with the boys this evening and did a little victory dance on scoring a goal, as you do.
Luke looked at me very disapprovingly and said; 'Mummy, you shouldn't be dancing. You should be concentrating.' (4)

Managed to get some fuel finally (the bizarre shortage in Sept 2021) and was trying to express to the boys the realisation of gratitude when something you took for granted was taken away and you didn’t realise how much it was valued. Robin rolled his eyes and left the room, Luke said, ‘Mum, you wouldn’t last a day a prison.’ (13)

I was driving Luke to school this morning. Somehow he’s inveigled his way into me doing this once a week (the crafty bugger and also another sign he’s destined to be either a lawyer or politician).
Observing the hazy sun I was trying to remember the poem starting ‘Seasons of mist and mellow fruitfulness’ so asked him to look it up on my phone and waxed lyrical awhile.
After we’d arrived at school and he’d got out I checked my phone to see, typed into Google, ‘how to make my middle aged mother be quiet.' (12)

Somewhat disappointing entry because I wasn't there at the time and nor was Luke's teacher but she told me
this afternoon when I collected him (through giggles) that when prospective parents were being shown round by
another staff member, Luke had stood in the corridor - 'singing and rapping'. Sadly he has denied all knowledge of this. (4)


Me: You didn't finish all your lunch today then Luke?
Luke: No. The last bit got stuck in the lunchbox. (5)


Luke went to the National Gallery today on a school trip. I asked how it had been.
‘Ok’ in an unenthused tone.
Me: See any good pictures...?
His face assumed a look of mild ennui crossed with slight scorn.
‘Nudity...’ (11)


Bed
Luke: I wish Sasha was here to put me to bed
(Sasha is the Mary Poppins-like wonderful babysitter, who is 24 I might add)
Me: Don't you want Mummy to be here...?
Luke: No. Sasha's got more energy. (3)


Luke: Mummy, are you going to sing a lullaby?
Me: (surprised, but quite touched) Would you like me to?
Luke : (decidedly) No (3)


Morning
Luke got into bed with me as is customary in the mornings. He then usually begins a paean to my virtues.
This time it was ; 'Mummy, you're so lovely. You're the best mummy. You look after us, you cook our meals, you're very good at sleeping...' (4)

Luke snuck into bed with me this morning as is his wont and snuggled up so his face was about an inch from mine. After a moment's quiet...
Luke: Mummy, can you stop that noise from your nose?
Me: What, breathing you mean?
Luke: Yes.  (3)

Luke prancing about this morning with nothing on his bottom half.
'Why don't you put pants on, Luke..?'
'I want my bottom plain.'  (3)


As Luke was thundering about this morning, I commented blearily on how full of beans he was.
'I'm not full of beans. I've got some beans. I haven't got six beans.' (3)

Job
Luke and I were having a discussion about school.
L: I don't like all the sitting about you have to do for school or the learning.
Me: What would you like to be learning then?
L: How to make a boat. Or a hotel. Or a door.
Me: Well, some of the skills you need for those you have to start learning at school.
L: You said to me once that if being a footballer didn't work out, I could always be an aeroplane driver. (5)

Luke, in customary inimitable fashion, has announced he wants to be an actor. He’s prone to crazes and they don’t last long, but he’s doing some drama classes at least and has stated he needs to get more exercise and eat more healthily.
‘Mum, I’ve decided I won’t snack and I’ll just eat whatever you give me, even if it’s disgusting….’
Makes me feel all warm and fuzzy..... (13)

Having forgotten something that had happened the day before, I said: 'Don't you remember Luke?'
Luke: I haven't got my thinking head on.
Me: Ah.
Luke: I've lost it.  (4)

You know people have different blood groups? Do you think mosquitoes have blood restaurants? It could be called Bloodthirsty. (12)

Drove down to Poole with the boys - in fact astonishingly short journey. Still, enough time for a round of - ‘naming professions for each letter of the alphabet.’
Luke is fantastically inventive at this. The best was his suggestion for F - ‘frog whisperer’. I WANT that job.  (13)

Luke in one of his chattering moods this evening. His stream of consciousness really is something to behold!
I can’t remember all of it, but managed to get these.
‘If a pregnant woman was struck by a bolt of lightning and died, but the baby survived, would its father be Zeus?’
‘If there was a planet somewhere of buff, muscly Brads and a skinny, weasly man arrived, would all the women fall in love with him?’
There was another long discussion about restraining orders and what would happen if the person who issued one then contacted the person they wanted to be at a distance from, culminating in…’Mum, have you had any trouble with restraining orders…?’
‘Erm, no.’
‘Nor me.’ (13) 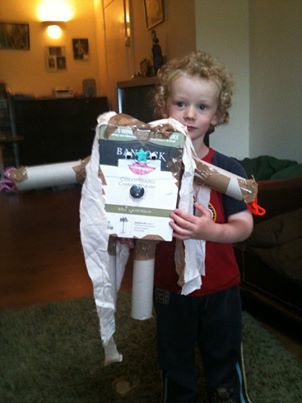 Wine box robot, Age 3
Luke decided to advertise the fact that I'm an old lush. He put googly eyes on the empty wine box (by the front door awaiting transferral to the recycling bin) and insisted on taking it to nursery and displaying it as his 'robot'.